The Last Slaves in America 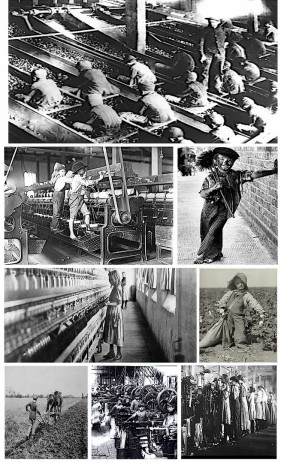 The Industrial Revolution saw the rise of factories in need of workers. Children were ideal employees because they could be paid less, were often of smaller stature so could attend to more minute tasks and were less likely to organize and strike against their pitiable working conditions.

Before the Civil War, women and children played a critical role in American manufacturing, though it was still a relatively small part of the economy. Advances in manufacturing techniques after the war increased the number of jobs…and therefore child laborers. 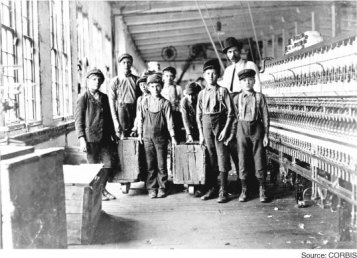 Immigration to the United States led to a new source of labor—and child labor. When the Irish Potato Famine struck in the 1840s, Irish immigrants moved to fill lower-level factory jobs. In the 1880s, groups from southern and eastern Europe arrived, provided a new pool of child workers.

What kind of life did the children who were affected by child labor have?
They had a really boring one. The children mostly worked all day then came home to sleep. Children that worked in factories could have been as young as 4-5 years old. The main reason most children worked was because their parents were poor and needed money, or their parents were unable to support them, so they didn’t have a nice house to come home to and some didn’t have a home. The homes that most of the children lived in were very small and poorly made. The reason for this was because a lot of people worked in the factories, so there was many other people living around the factory (or for any other job) and they had to build building quickly, small and very close together for the people moving close to their job. Most of the factory workers were children, and they often got low pay and were treated badly by the supervisors. They also got very little to no education, so most of them couldn’t read or write, and because of that they didn’t have very good jobs when they grew older. But that changed for some children when in 1836 Massachusetts, which was the first state to make this law, made a law that said children must go to school for at least three months a year. 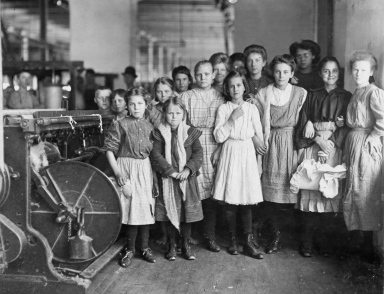 The dangers of the workplace extended past the gyrating machines, explosions and cave ins. Match companies employed women to dip the match heads into tanks of phosphorous. Over time, the inhaling of the fumes caused many of the workers to suffer from a horrible disease known as phossy jaw. They endured terrible pain in their jaw and teeth, and eventually disfigurement to the face. Bone and tissue would die and rot away causing foul odor and a disgusting discharge. In time these workers suffered brain damage and ultimately death. Workers in glass factories regularly suffered burns, sometimes severe. Additionally, too many glass workers became blind from the intense heat. Meatpackers, who were unfortunate enough to be assigned to the pickle rooms (pickling meats and sausage was fashionable before freezers became widespread), frequently developed a very nasty infection from constantly handling cold meat. Workers referred to the painful infection as pickled hands. The skin would crack and open to the bone. The palms and back of the hands would become one aching and oozing sore. Unless the worker stopped handling the meat, the infection would worsen, and even then, it took months for the hands to heal. Some of the deadliest work for both meatpackers, as well as coal miners, had to do with air-borne exposures that led to lung infections. Miners who breathed in coal dust for years frequently developed black lung disease. Meatpackers were at risk of coming down with infected lungs when working in areas that contained air particles of ground hair, wool, bone and fertilizer. For both, the lung infections sometimes developed into fibrosis, and in the worst cases,necrosis.

With the absence of government regulation, the “Captains of Industry” had an easy formula for financial success. They simply figured out what a product would sell for on the open market, and then determined the cheapest way to produce it. There were lots of fixed expenses – land, facilities, equipment, raw material, and more. Labor, however, was not a fixed expense. It was the most important investment the industrialist made, and the one that was abused. Employees worked long hours, received low wages, and benefits were rare. Many times they worked in unsafe and unhealthy conditions. Fresh immigrants and an abundance of children, as young as 8 years old, made up their work force. The largest new influx of workers, however, were women. The numbers of women working in America’s factories rose from 2.4 million in 1880 to 8.6 million by 1900. Employers, however, paid women half of a man’s wages, and children made one-tenth. Inexperienced in the operation of fast moving machines, they were also innocent to the possibilities of unexpected disasters. These individuals made up the working collateral of the industries. 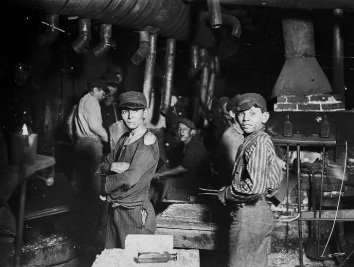 History of the Child Labor Law: In 1904, the National Child Labor Committee (dedicated to abolishing child labor) was formed. This organization was successful in getting a national law passed and signed by President Wilson in 1916, but it was overturned by the Supreme Court. All efforts to protect children were blocked until the Great Depression, when adults needed the jobs that children had. In 1938, a law was passed protecting children in most industries - except farm labor. There is still no law covering agriculture and it is estimated that 500,000 children still work on farms (and they're not just children of farmers).

Educational reformers of the mid-nineteenth century attempted to convince the public that a primary school education was a necessity if the nation were to advance as a whole. Several states established a minimum wage for labor and requirements for school attendance—though many of these laws were full of loopholes that were readily exploited by employers hungry for cheap labor.

Beginning in 1900, efforts to regulate or eliminate child labor became central to social reform in the United States. The National Child Labor Committee, organized in 1904, and state child labor committees led the charge. These organizations employed flexible methods in the face of slow progress. They pioneered tactics like investigations by experts; the use of photography to spark outrage at the poor conditions of children at work and persuasive lobbying efforts. They used written pamphlets, leaflets and mass mailings to reach the public.

From 1902 to 1915, child labor committees emphasized reform through state legislatures. Many laws restricting child labor were passed as part of the progressive reform movement of this period. But many southern states resisted, leading to the decision to work for a federal child labor law. While Congress passed such laws in 1916 and 1918, the Supreme Court declared them unconstitutional.

The opponents of child labor sought a constitutional amendment authorizing federal child labor legislation and it passed in 1924, though states were not keen to ratify it; the conservative political climate of the 1920s, together with opposition from farm and church organizations fearing increased federal power over children, acted as roadblocks. 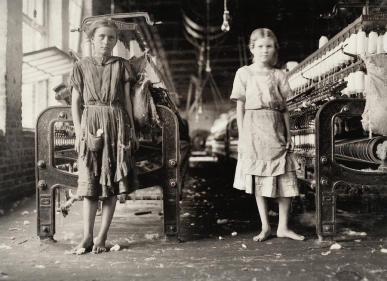 The Great Depression left thousands of Americans without jobs, and led to sweeping reforms under Franklin Delano Roosevelt’s New Deal that focused on increasing federal oversight of the workplace and giving out-of-work adults jobs…thereby creating a powerful motive to remove children from the workforce.

Almost all of the codes developed under the National Industrial Recovery Act served to reduce child labor. 73 years after the Civil War ended and the 13th Amendment abolishing  slavery was ratified. The Fair Labor Standards Act of 1938 set a national minimum wage for the first time and a maximum number of hour for workers in interstate commerce—and also placed limitations on child labor. In effect, the employment of children under sixteen years of age was prohibited in manufacturing and mining. Education underwent reforms. Many states increasing the number of years of schooling required to hold certain jobs, lengthened the school year, and began to more strictly enforced truancy laws. In 1949, Congress amended the child labor law to include businesses not covered in 1938 like commercial agriculture, transportation, communications and public utilities. 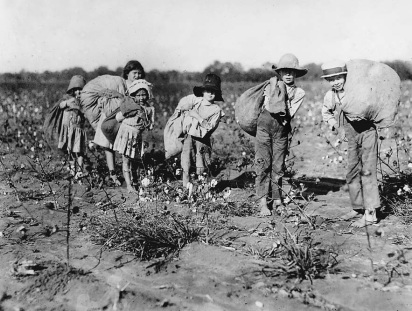