Thats how we get Re-elected!

Government loves to spend our money and without the interest of the people, there is no Government of the People!
When was the last time you received an email or letter from your representative telling you about a bill coming up and wants your opinion before he or she votes on it? Here's an example:

Where Does All that Money Come From?

Washington — The Senate voted to approve a roughly $1 trillion bill to revamp the nation's infrastructure on Tuesday, delivering a bipartisan breakthrough on legislation that includes key portions of President Biden's domestic agenda.

THEN, President Biden wants our representatives who keep getting re-elected by telling us, We got your back! Then this comes up. "Schumer says Dem-backed $3.5T bill will amount to 'transformational' change for America."
This phrase "transformation," has been used a lot by the Democrats starting with Obama.

“We are five days away from fundamentally transforming the United States of America.”

"We're trying to transform this country, not just beat Trump"

We seem to be getting the meaning of what that word means. Total and absolute control of America through Socialism. 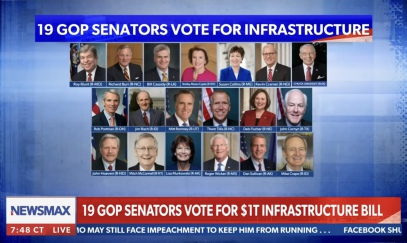 Here are the 19 Republican senators who signed on to the $1.2 Trillion Bill and the Republicans who made Joe and the Democrats very happy that they're smiling too! Democrats love to spend your money. Why? More Government Spending, More Government Controi!

This shouldn't be a Big Surprise since a few of these same faces blocked President Trump's plans to Make America Great Again for the American People!

(just to name a few)

This is what Mitch McConnell said when President Trump wanted Congress to pass an Infrastructure Bill! 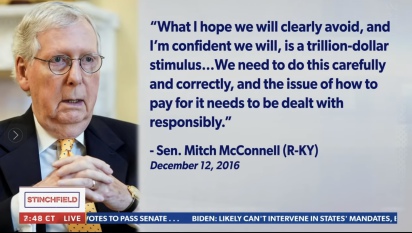 This is what Congress put in the Covid Relief Bill

Not to give you a history of the media and its technological advances over the years, it’s worth presenting a point we have overlook for decades. Back before TV business advertised through radio, newspapers and magazines (not including billboards and other signage around town). When TV came along we added basically three TV channels and a verity of shows with their own sponsors.

Of course, we all know business incorporates their advertising into the price of their products. Besides salaries, benefits, bonuses, purchasing, buildings and its essentials, etc. etc., which also includes sponsorships, donations to different organizations, as well as the main goal, Profit! And who pays for it, We Do!
Through the years as technology developed, so did the world of advertising. Now, with the expansion of media outlets like cable TV we have added the world Wide Web with thousands of internet possibilities, another means of presenting their product and another boost to product pricing. And who pays for it, We Do!
Under this reality, we buy a product or service, the business has all this extra money to invest in things for example, like movies, sports and media which make millions to billions. Then they turn around and belittle, trash and out right Lie about the United States of America the country and the American People who love this country. It should make a lot of people pretty angry. Sports figures, actors, TV personalities who can make hundreds of  millions of dollars who spit in the faces of every hard working American and who pays for it, We Do!
Yes, we pay for everything and although people will get angry and talk about it, we constantly allow the abuse. What a company buys out another company for billions of dollars, who pays for it, We Do!

When companies move plants overseas tio save money do they pass the savings down to us, No!

Q) How did your life become worse during the Trump Administration?

* Liberals will say and do anything to prove they're right. No matter what it cost the American People.

* Liberals and Democrats are Unbelievable, so Don’t Believe Them!

* Democrats Love America, their history shows they love to Control it!

* Everytime Democrats open their mouth, a foot comes out!

* America can not help others if we won't help ourselves first. Make America Great and Keep it Great, First!

* No more legal or illegal immigration, until we support and aid our poor and homeless here in America. Are you listening Democrats and Liberals?

* * Q)How did immigrants who came to America live before the days of Welfare?

*We watch NewsMax, One American News and other internet  cable TV News networks that give Facts NOT Opinions. .

https://www.oann.com/ and open up NewsMax to all cable outlets!

So these channels can schedule preexisting pro-American and Conservative YouTube channels, uncensored by Liberal   Socialists, shows like Turning Point USA, PragerU, CampusReform, Project Veritas, Paul Joseph Watson, Black Pigeon, Dinesh D'Souza, Ben Sharpiro and many others all on one or multiple TV channels.

*To have our own Conservative Legal team to represent the American people against Liberal and Democratic fraud, lies, fake news, false accusations and frivolous lawsuits. We could collaborate with the Institute For Justice.

2020 This is what Congress put in the Covid Relief Bill

AMERICANS = $600 (Trump said no signing until the American People. Congress was forced to change that to $2,000 per eligible person and nothing for the businesses who were forced to close because of the government!)

To see a more on Foreign Aid