No News is Good News

Why are some Americans willing

to believe the lie, rather accept the Truth?

We never noticed the changes that were going on in the media, because of our trust in those who gave us the news. It started when the media started picking and supporting their own candidates at election time. Reporting negative and unsupported reports to away public opinion became a goldmine. Taking away the option for the people to decide on the merit of the candidates. The media discovered that the more negative the reporting, the more interest they got from the public and higher the ratings. So that's why people tuned in!

with supporting a particular political party and promoting a particular candidate as well as demonizing the other. It became self evident that they had enormous power during Water Gate and the Nixon tapes, Barry Goldwater became a warmonger who was going to blow up the world. Ross Perot was a crazy old man who actually spoke the truth about the corruption in Washington and had solutions to set America on the way to becoming a stronger super power. Like Donald Trump, Perot was a successful businessman, not a politician. He knew government was not only a business but effected American businesses at home and all over the world. The people say that in Perot and then Donald Trump and he was becoming very popular with the American People. So much so that he disrupted the two party system that gave unlimited power to the politicians, their political party and their rich and powerful contributors! While all the time Trump was being attacked with faulted accusations by the media just like Perot for having the unmitigated gall to presume he could this deeply embedded currupt two party system kept in place by a all powerful Media trained by liberal institutions lavishing in their power over the people.

Slowly, Opinion Journalism and the birth of the Main Stream Media (MSM) gave birth to Big Brother telling us to comply to the government without question. The MSM finally realized they had the power of half truths, creative editing and out right lies to control the American people under the clok of Freedom of 5he Press. The MSM coordinated with Democrats who already had a history Tyranny that would protect their abuse of the Constitution. Somethtge Conservative Republicans would never do,

Then in 2016 We the People had the audacity to go against the power of the Press, as well as the powerful Democratic Party to elect Donald J. Trump as our president. Another Perot style attempt, not a politician, but a successful businessman, calling out the MSM for what it really was in front of the whole worlld, Fake News! The MSM went ballistic and for five years declared all out War on all of us by using every baseless  and opinions to targot and  Trump!

So, where did these corrupt journalists come from? The same liberal socialist teachers who themselves were raised to believe in the rich is bad for being rich, make love not war, government is our salvation to support everyone, Capitalism is for the rich, Socialism and Communism is for the people, the age of Aquarius went to college to teach our children the truth about America!

TV and journalists and the Fake News by people who were programmed to think the worse of the United States of America! 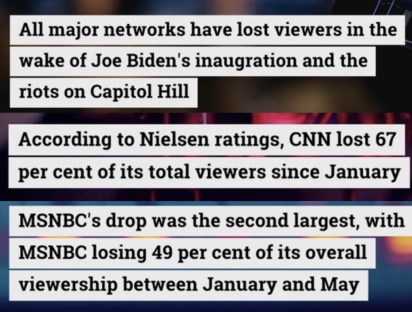 Who keeps the Fake Media promoting hate in America? The people and companies who support their propaganda, pay their bills and give them multimillion dollar contracts.

One example a list of CNN supporters who keep them alive!
http://www.americaas1.com/no-news-is-good-news/cnn-supporters/

With the rise and popularity of the internet it's amazing how the media has evolved. Not only has the mainstream media expanded into the World Wide Web, but it's opened the door to other small and growing internet news organizations which would have never had the opportunity  for exposure to the people. This has opened the way to more views to the same events and also provided more investigative reporting and a deeper understanding of the subject. The possibilities are endless and more information, input knowledge to make better decisions. Especially, when it comes to thise we hire (vote for) to represent us in government. ONLY, if we pay attention and take advantage of the gift of information we have been givin through technology. Which is something the American people have ignored, which has cost us more and more of our freedoms every day!

Members of the Society of Professional Journalists believe that public enlightenment is the forerunner of justice and the foundation of democracy. Ethical journalism strives to ensure the free exchange of information that is accurate, fair and thorough. An ethical journalist acts with integrity.

Meanwhile, the American People have discovered their deception and the answer comes abundant clear under the Journalism Code!

1. Honesty: journalists must be truthful. It is unacceptable to report information known to be false, or report facts in a misleading way to give a wrong impression;

2.Independence and objectivity: journalists should avoid topics in which they have a financial or personal interest that would provide them a particular benefit in the subject matter, as that interest may introduce bias into their reporting, or give the impression of such bias. In cases where a journalist may have a specific financial or personal interest, the interest should be disclosed;

3.Fairness: journalists must present facts with impartiality and neutrality, presenting other viewpoints and sides to a story where these exist. It is unacceptable to slant facts;

4. Diligence: a journalist should gather and present pertinent facts to provide a good understanding of the subject reported;

5.Accountability: a journalist must be accountable for their work, prepared to accept criticism and consequences.

This is how a Fake News employees treat the President, Press Secretary Kayleigh McEnany and the American Prople at a White House Press Confrence.

The Fake Media is so pissed off at the American People

for not following their commands by making them

look bad in front of their Democrat Masters!

It's amazing how much liberals know with just a Bachelor's Degree in Journalism and how much they hide from the people about their own dark past.

There are just too many STUPID and repetitive questions a President can answer when there's a country to run! So what are we doing to help President Trump? Contacting sponsors of media telling them supporting media Lies and false information is unAmerican and there are consequences to supporting such self centered media corporations who attack the basic fabric of out democracy! The American people won't boycott, but we will send a message!

Code of ethics in media

At the White House Press Conference

Tell all those fake reporters, this is not a debate, it's a press conference. So, ask your question, get your answer and Shut the Hell up