Repeat what you see.
Biden and the Democrat Socialists

think money comes from a TREE,

but no, it really comes from ME!

When we organize our own spending we have to balance our spending with our income and expences. This determines what we can afford while what we owe. We constantly have to decide what we want against what we can afford to spend which means it won't always be the best product or service. This is where the government has the most difficulty and we end up footing the bill. This section is a way for the American People to voice their opinion.
This is where our decisions can cost more or save us a lot. I invite you to send a government expense that is completely rediculous and your solution to their action. It may be Don't spend the money to here's a less expensive alturnative.
Of course, we can filla million pages with this subject, but there is a more effective way. We have to, as a group send the same information to the elected officials to which this proposal came from. This includes all levels of government, from the local level to the Federal Government. Why should 5his be done? We have to get used to, as the voter, taxpayer, resident and especially an American Citizen, to tell our representatives on all levels we rule them through our vote. There's no more you rule us! In politics, silence from the people is a Yes Vote for them! No more silent majority!

Here is an example of our Representatives voting for a bill and they have no control over how it't spent!
Nineteen Republicans joined Democrats in voting for the Biden's $1.5 trillion infrastructure deal on Tuesday and a video of what has been discovered on how it is being spent.
The Republicans are:

This isn't just a Democrat or Republican problem.
This is an American Voter problem! America is our business and when we ignore our business Biden and the Democrats is what happens!

Who thought corn would be a proble. Only when we pay for it twice, thanks to our government!

Here's a FOX Business Report from November 30, 2021 on Government spending which the rich won't pay for since they'll be passing it off to YOU and me! 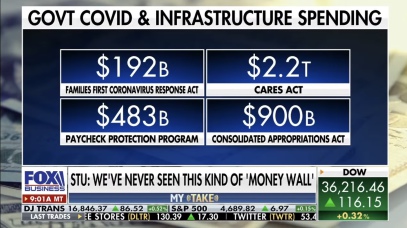