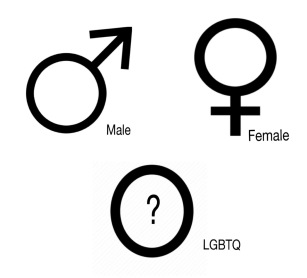 So what do businesses and government

Require under job applications and identification and statistical information?

Solving the Problem of Gender Confusion

The government has made it clear that people can represent or identify as someone other than man and woman. However, there has to be a way to protect the LGBTQ+ Community when it comes to pressing charges in discrimination law suits, preventing criminals and sexual predators from falsely using LGBTQ+ identies to commit sexual and other criminal activities.

To protect the credibility of actual LGBTQ+ individuals, it should be mandatory for the government to create a set of standards which would qualify each identity and receive a identification card. To be recognized as a legitimate member of the LGBTQ+ community the government will document that person and provide them with an identification card to insure their legal standing In any encounter. This will leave no question of sex, gender or other sex related situations..

In addition the government will change the sex question on all forms and documents to allow add different codes other than M/W.

The Supreme Court on Thursday said that Philadelphia violated the First Amendment when it froze the contract of a Catholic foster care agency that refused to work with same-sex couples as potential foster parents because the agency believes that marriage should be between a man and a woman.

The dispute arose because Catholic Social Services -- which was receiving taxpayer funds -- was unwilling to work with LGBTQ couples as foster parents out of religious objections to same sex marriage. The policy was brought to the attention of the city in 2018 after inquiries from a local newspaper, and soon after the government put a freeze on the contract. The group, led by long-time foster parent Sharonell Fulton who has fostered more than 40 children over 25 years, brought suit.

The issue before the court was whether Philadelphia could require foster agencies to comply with its non-discrimination law.

Chief Justice John Roberts wrote the majority opinion for six of the nine justices. Justices Clarence Thomas, Samuel Alito and Neil Gorsuch joined in the result, but did not join the majority's rationale -- and was disappointed at the result.

“The Court has emitted a wisp of a decision that leaves religious liberty in a confused and vulnerable state," Alito wrote. "Those who count on this Court to stand up for the First Amendment have every right to be disappointed -- as am I."

Alito would have gone much further overruling decades old precedent and making it much more difficult for the government to enforce laws that burden some individuals' religious beliefs.

They said they would have overturned a 1990 case that said that if a legal requirement applied equally to everyone, even if it burdened religious practice, it was constitutional as long as the government had a rational basis for the law.

"Today's decision is another victory for religious groups, but not the major one that they sought," said Steve Vladeck, CNN Supreme Court analyst and professor at the University of Texas School of Law.

"The court's three most conservative justices wanted to overturn three decades of precedent and subject virtually all government regulations that even incidentally impact religious practice to the most exacting judicial scrutiny. But Chief Justice Roberts and Justices Kavanaugh and Barrett appeared unwilling, or at least not yet ready, to make such a move -- resting the decision on narrower grounds," he added. "That may also explain why none of the three more progressive justices dissented -- lest they encourage the three justices in the middle to go bigger."

Roberts, joined by the liberals on the court as well as Justices Brett Kavanaugh and Amy Coney Barrett, focused on the fact that Philadelphia had not shown a good reason why the contract should be frozen and the religious rights of the agency should be burdened. He noted that there were other agencies available to work with same sex placements.

relationships inconsistent with its beliefs," he wrote. He added that the agency "seeks only an accommodation that will allow it to continue serving the children of Philadelphia in a manner consistent with its religious beliefs; it does not seek to impose those beliefs on anyone else."

The city, he noted, had allowed other exemptions based on marital status or disability but not an exemption to the agency for its religious beliefs.

"With today's decision, the Court has usurped the City's judgment that a non-discrimination policy is in the best interests of the children in its care, with disturbing consequences for other government programs and services," Cortes said. "At the same time, the city is gratified that the Supreme Court did not, as the plaintiffs sought, radically change existing constitutional law to adopt a standard that would force court-ordered religious exemptions from civic obligations in every arena."

Catholic Social Services is a religious non-profit affiliated with the Archdiocese of Philadelphia that provides foster care services in the city. It is one of 30 foster care agencies that has a contract with the city that is renewed on an annual basis. When a child in need of foster care enters the city's custody, the child is referred, by Human Services, to one of the foster care agencies. That agency chooses the appropriate foster parent for the child. The contract includes language prohibiting agencies from discriminating on the basis of race, color, religion or natural origin as per the city's Fair Practices Ordinances.

A federal appeals court ruled in favor of the city, holding that the policy is a "neutral, generally applicable law, and the religious views of the [Catholic Social Services] do not entitle it to an exception from that policy." The court held that the foster agency "failed to make a persuasive showing that the City targeted it for its religious beliefs, or is motivated by ill will against its religion, rather than sincere opposition to discrimination on the basis of sexual orientation."

The court said that the city acted in "good faith" in its effort to enforce its laws against discrimination.

The Catholic charity, represented by the conservative Becket Fund, noted that it has served the city for over 100 years and that no same-sex couples had sought foster-care certification from the agency.

In court, Lori Windham told the justices that the agency was making a "modest" request which is to be able to allow diverse religious agencies to serve the city and get an exemption from the city's Fair Practices Ordinance. Instead, she said, the city was attempting tell a private religious ministry "how to run its internal affairs and trying to coerce it to make statements that are contrary to its religious beliefs as a condition of continuing to participate in the religious exercise that they have carried out in Philadelphia for two centuries."

She urged the court to revisit a 1990 case, Employment Division v. Smith, court precedent that holds that a law that burdens religious exercise is not subject to strict scrutiny from the court as long as it applies equally to everyone.

In addition, Windham said that Philadelphia violated free speech guarantees by forcing it to deliver the "government's preferred message on marriage," and demonstrating hostility toward its religious beliefs.

Before the election, the Trump administration sided with the foster care agency and argued that the city violated the agency's rights and showed hostility to its beliefs.

Neal Katyal, a lawyer for the city said that while the organization continues to assist foster children through other government contracts, and can support foster parents in its private capacity it could not contract with the government while sidestepping the city's non-discrimination requirement. He stressed that neither the district court nor the appeals court found that the agency was targeted for its religious beliefs.

Lawyers for the ACLU, which is involved in the case, said it could have "profound consequences" for the more than 400,000 children in foster care across the country.