From the time President Trump announced his run for the White House continuing up to Today. Democrats have tried everything in their power to impeach him, discredit him and destroy his reputation to conquer his Conservitive Base so they will submit to their Democrat Socialest Agenda.
Is believable that For several years during the Trump Administration Democrats and Main Stream Media attempted to smear President Trump's election with false accusations of Russian collusion and voter fraud, and yet, turn around and say no such voter fraud accused in the 2020 when Trump was out campaigning all over the country with record breaking attendance, but Biden had the most votes in American History by campaigning from home?

Does it make any sense that there were only two incidents of violence in the past One of the big talking points for accusing Trump and his peaceful, hard working supporters are events in Charletsville, Virginia and the January 6th Capital action.
There are many similarities between the two so we should take the time to investigate. 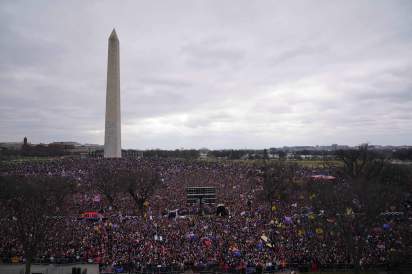 On January 6th, 2021, the biggest Trump rally ever in Washington DC had close to 2 million people (family event; there were children there) of all colors.

Was ANTIFA at the January 6 protest?

According to a tweet a week after the elections, Antifa from Antifa's hometown of Portland, OR, will be mixing in with the crowd of Trump supporters who will assemble in Washington, DC around the National Capital on January 6.

The Antifa folks, however, will be dressed just like the Trump supporters to try and blend in with what is expected to be a massive crowd. 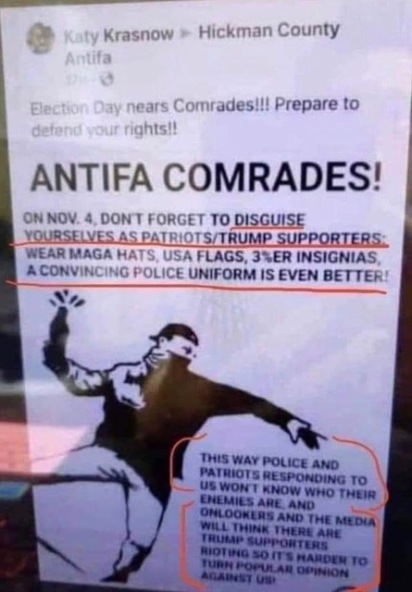 This poster came from.

This is what ANTIFA does, but who's directing and funding them? One thing we do know, Democrat cities allow them to terrorize, damage and loot their cities along with the businesses and people in them!

ANTIFA Attacking Christians in Portland Oregon a Democrat stronghold.
This is the Democrat's answer to defund and replace their Police Departments!

Is ANTIFA the replacement for Defund the police? 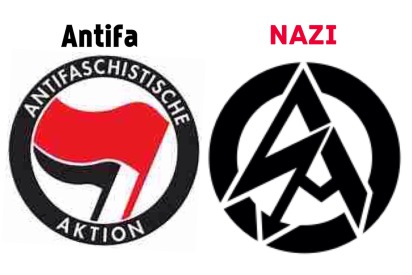 The Brown shirts (in German, Sturmabteilung) were the Nazi Party's original paramilitary wing. It played a significant role in Adolf Hitler's rise to power in the 1920s and 1930s. Its primary purposes were providing protection for Nazi rallies and assemblies; disrupting the meetings of opposing parties; fighting against the paramilitary units of the opposing parties, especially the Roter Frontkämpferbund of the Communist Party of Germany (KPD) and the Reichsbanner Schwarz-Rot-Gold of the Social Democratic Party of Germany (SPD); and intimidating Romani, trade unionists, and especially Jews.

Is there a parallel between Nazi Germany and the way President Trump and his supporters have been bombarded with accusations, falsely slanderous attacks by the press and blocked on  social media?

The Takeover
Socialism slowly takes over a country a step at a time. However the Democrats have speeded up the process to take control of the American People before the next election. Their goal is to eliminate the competition and have the freedom to dominate the Elections by any means. Like providing the biggest voter turnout in American History.
One step closer!

Meanwhile, the estimated hundreds of thousands protested outside, a few hundred entered the Capital. However, as stated below, hundreds of people could be charged with low-level misdemeanors for their participating. 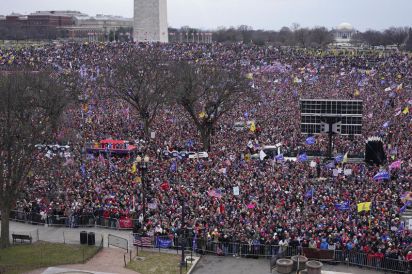 Ray Epps appears to be among the primary orchestrators of the very first breach of the Capitol’s police barricades at 12:50pm on January 6. Epps appears to have led the “breach team” that committed the very first illegal acts on that fateful day. What’s more, Epps and his “breach team” did all their dirty work with 10 minutes still remaining in President Trump’s National Mall speech, and with the vast majority of Trump supporters still 30 minutes away from the Capitol. ..https://rumble.com/vo7hcn-ray-epps-shouted-down-as-a-fed-jan-5.html

Now Turning Point USA comes out with Epps and this.

Also, According to the media, three men spearheaded the move to enter the capital that day and chased Capitol Police Officer Eugene Goodman
Joshua Hughes is 37 years old. His brother and co-defendant, Jerod Hughes, is 36. The two live in East Helena, Montana and Douglas Jensen Des Moines, Iowa. 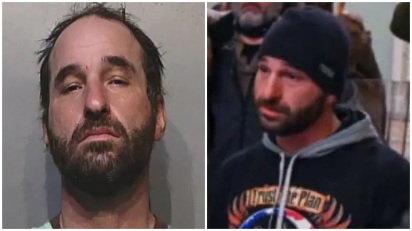 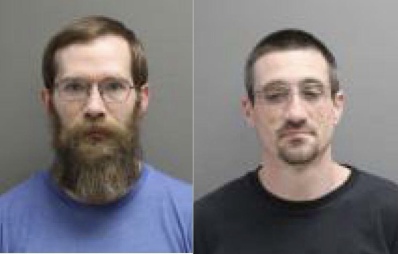 Does these men sound like Trump Supporters or ANTIFA?
Douglas Jensen
Photos on 37-year-old Joshua Hughes' Facebook page show him pumping iron, posing with friends and attending a rally a few years ago in Berkeley, California. His political views, according to the page, are to “Kill all zombies.” And in the “About Joshua” section of his page, he offers: “Never give in.”

The FBI's Answers to January 6th

He has also posted photos of himself attending an April 29, 2017, rally in Berkeley, California, in which hundreds of people attended to protest a canceled appearance by conservative commentator Ann Coulter. News stories from the event said violence did not materialize.

Prosecutors say Thomas Sibick "enthusiastically participated" in the violent mob attack at the Capitol and then bragged about it on social media, a factor in their effort to place him in federal custody.

A court document filed Monday shows a photo the Amherst man posted of himself holding a riot shield "like a trophy," prosecutors said.

And a video taken during the Capitol attack shows him screaming into his camera, “Just got tear-gassed, but we’re going, baby, we’re going! We’re pushing forward now!”

Sibick faces charges of assaulting Washington, D.C., Metropolitan Police Officer Michael Fanone, who was dragged down Capitol steps into the mob of rioters. Sibick has admitted to taking Fanone's badge and radio, burying the badge in his backyard, and then lying about it, according to court filings.

Beyond the nature of the attack, prosecutors point to Sibick's criminal history, their evidence, and the danger they say he poses to the community as reasons why a federal judge Tuesday in Washington, D.C., should reverse a ruling from Friday, when Magistrate Judge H. Kenneth Schroeder Jr. in Buffalo released Sibick to home confinement in custody of his parents at their Amherst home. 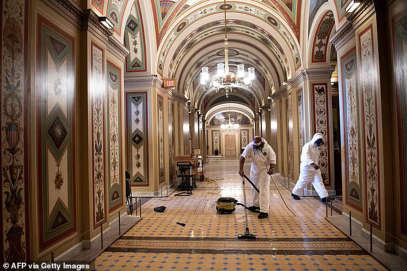 While federal prosecutors tabbed the damage at $1.5million, the total costs of the Capitol attack are far more expensive.
The House of Representatives passed a bill on May 20 to provide $1.9billion in security funding, which includes $40million for the Architect of the Capitol, the Post reports.
$730 million of that security funding will go to reimburse the National Guard and other law enforcement and emergency agencies for their expenses in relation to the Capitol riot.
The bill, which is pending Senate approval, also includes nearly $530million for the Architect of the Capitol and another $250million for better fencing, cameras and bulletproof doors and windows, according to the Post. However, the people who pays for all this will not have the opportunity to see the video surveillance recordings because Nancy Pelosi refuses to release them!

The only person murdered that day

Where do you see Ashli Babbitt destroying property?

(I had the video of the Ashli Babbit murder, but as you can see YouTube will not let it be viewed here even though it's not their property!

Some investigations take months even years, but the Ashli Babbitt shootings was too quick and decisive to end like this! Nancy Pelosi and the Democrats wanted to show their power! Have you ever seen any Trump American act like this? But we have seen ANTIFA all the time!. Just like the ones in Seattle abs Portland that are protected by the Democrats. And, how is this guy who started smashing the glass door then disappeared? He was face to face with the officer at the door. 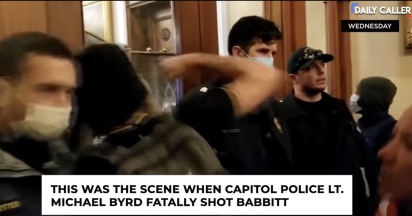 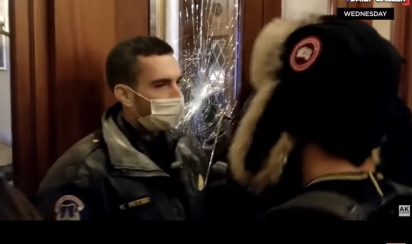 Then he backed off and disappeared. 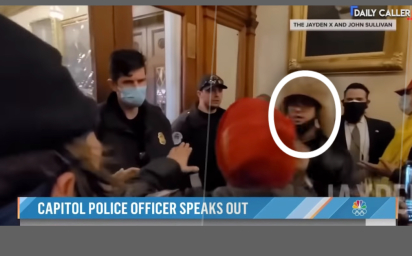 Republicans are asking questions about the person or people who broke the glass on the doors in the Capital.

The Democrats and the media describe the January 6th crowd like this.

"disgrace to our country."
"storming of the U.S. Capitol"

"far-right militia"
There hasn't been a complete background check by the FBI on the violent ones to see if they were actually Trump Supporters. Is it possible ANTIFA and other violent groups who the Democrats protect in their own cities have spearheaded this breakin?  For these violent crimes let's see how the sentencing is going!

Anna Morgan-Lloyd, "described it as the “best day ever” on Facebook, was sentenced on Wednesday to probation and no jail time after pleading guilty to a single misdemeanor." Her sentence sets a benchmark for the hundreds of people charged with low-level misdemeanors for participating in the Jan. 6 insurrection.

Paul Hodgkins, a 38-year-old Floridian pleaded guilty to breaching the Senate chamber during the US Capitol insurrection was sentenced Monday to eight months in prison.

Thanks to Judicial Watch details of the Ashli's murder are coming out and what they're finding out are disturbing, bizarre.and very questionable. Like everything else in the President Administration.

CBS (August 3, 2021)
"Four officers who responded to the January 6 attack on the Capitol have died by apparent suicide, including two whose deaths were confirmed on Monday by a spokesperson for Washington's Metropolitan Police Department."
Just like Jeffrey Epstein and Complete List of Clinton Associates Who Allegedly Died Mysteriously or Committed Suicide Before Testimony, Including Jeffrey Epstein

Capital cop caught in "big life" about a J6 Defendent! The truth is slowly surfacing!

Does it seem strange that from August 12, 2017 to January 6, 2020 there were only two incidence of violence from Conservatives accused of being Trump supporters. However the Democrats want to direct all the destruction, looting and violence in Democrat cities across the United States and divert the attention to a more political goal, demonize the Republican Party and keep control of America through Socialism. History of the world has shown us pitting the people against each other is the perfect weapon to win control of a country.

"White supremacist terrorism is the deadliest threat to the United States, President Joe Biden told lawmakers Wednesday night as he aimed to pivot from the country's post-9/11 foreign fights to one at home."

besides, the Democrat Party has had a long history of manipulating the American People to do their do their bidding. Through government hand outs to demonizing the opposition.